Ways to Fix Engine Mount Failure in Your MINI

Ways to Fix Engine Mount Failure in Your MINI

Your MINI’s engine is an assembly of moving parts which will cause vibrations and noise as your engine operates. To minimize the toll that excessive vibrations and harsh movements can have upon the engine and its components, the engine isn’t directly affixed to the frame of your MINI. Instead, your MINI’s engine is secured to the frame via engine mounts. These are made of reinforced rubber or hydraulic engine mounts, the latter which are more expensive.

Depending on who you ask, as well as their location, engine mounts may also be referred to as motor mounts or transmission mounts. The soft rubber of the mount is able to absorb large amounts of shock and vibration created by the engine and its associated parts. This creates a more comfortable ride and preserves the overall health of the engine.

Let’s learn more about this hardworking yet understated part and learn how it functions, signs of failure, and how to make repairs.

There are 3 main types of engine mounts which vary in form, function, and cost. At their heart, all types of mounts absorb engine vibrations, but some offer more specialised or fine-tuned performance. Your MINI may have one, two, or all of these types of mounts:

These are the most common and the most basic. This type of mount has metal mounting points which are used to connect the engine to the body of the MINI. The metal parts are separated by heavy rubber blocks which allows for controlled movement. This successfully limits vibrations throughout the car.

This type is a little more high tech than rubber mounts. They are also constructed of metal and rubber but have hollow chambers that are filled with hydraulic fluid. Passive hydraulic mounts transmit much less vibration than rubber mounts but come with the drawback of a shortened lifespan and a higher cost.

These are similar to passive hydraulic mounts, but alongside the use of hydraulic fluid, they use a vacuum chamber which allows the mount to actively change its firmness, depending on the driving situation. At idling, the mounts will be much looser to absorb the extra vibrations. Conversely, when driving, the mounts will stiffen as less vibration needs to be absorbed.

As hydraulic mounts have a shorter lifespan, and many vintage MINI’s are still being driven by enthusiasts, it is likely you may experience engine mount failure at some point of your MINI ownership. To be able to quickly spot engine mount failure, follow these three tips:

This should become very noticeable but might happen gradually over a few weeks or months. This issue is more common with hydraulic mounts but can occur with rubber mounts also. When it fails, it won’t be able to correctly absorb the shocks from the engine, which is what creates increased vibrations.

When the mounts are failing, you can also experience excessive engine movements as the mounts are no longer correctly holding your engine inside the car. While it is impossible for the car to eject the engine, excessive moving will cause damage to the engine and its connected parts.

Hearing clunking sounds when braking or slowing down after acceleration is a strong indicator that your motor mounts have failed and your engine is able to lift up at speed and drop when slowing back down. This problem should be dealt with quickly to prevent expensive damage.

Replacing an engine mount is quite easy for those with a bit of engineering know-how. To replace a mount you need to follow these steps:

Loosen the mount and lift the engine away from it. Remove the old mount and discard.

Don’t damage the vacuum ports on active mounts. Make sure fasteners are tight and let the engine rest on the mount before torquing them and connecting vacuum lines. 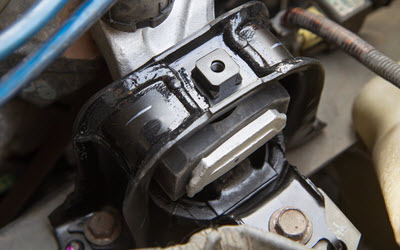 the communities of Redwood City, CA and are specialists in the service, maintenance, and repair of all makes and models of MINI. Cerrone’s will become your choice for service as your one-stop MINI repair shop. We are offering all new customers a 10% discount. Contact our friendly team today to find out how we can help you keep your MINI in top condition for years to come.